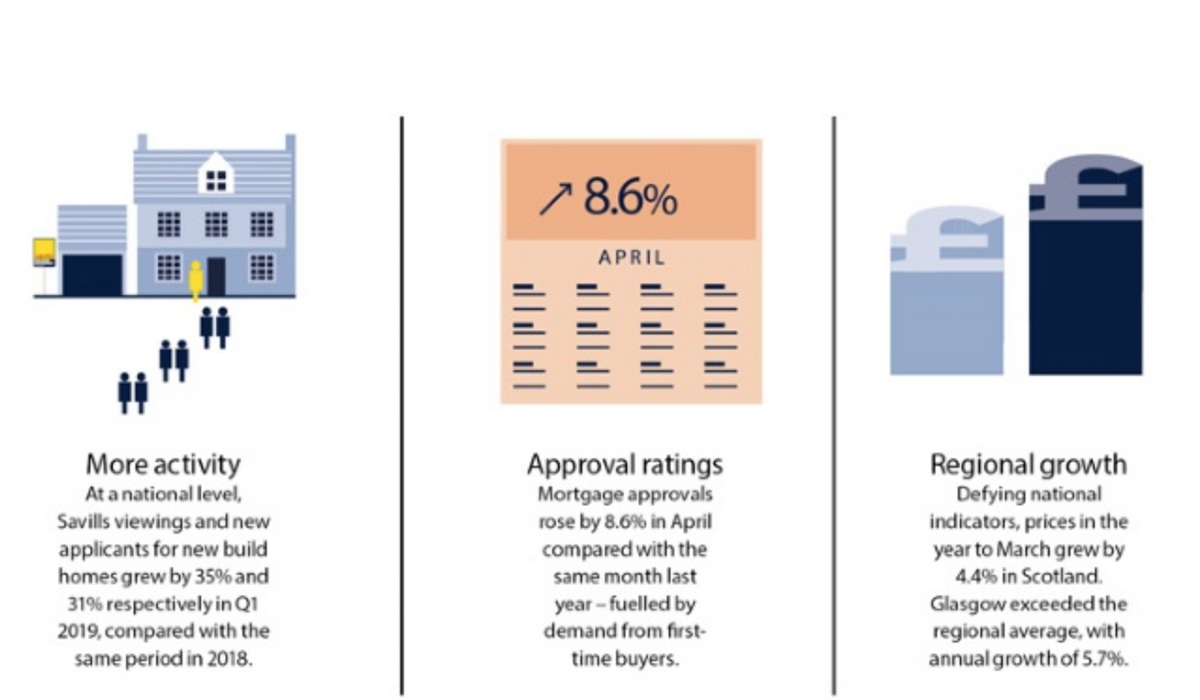 CAUTIOUS OPTIMISM RETURNS TO THE MARKET

Despite ongoing political uncertainty, there has been a significant increase in buyer confidence in the first quarter of 2019, resulting in greater interest. Realistically priced properties are attracting particular interest, especially in the new build market. Here, the level of viewings and new applicants are up considerably. However, this increase in enquiries isn’t yet translating into commitment and transactions.

At a national level, Savills viewings and new applicants for new build homes grew by 35% and 31% respectively in Q1 2019, compared with the same period in 2018. This jump in new build buyer interest has been spread across the country, but has not been universal. Areas which have seen a particular up-tick include London and markets in its commuter belt, as well as Glasgow and Edinburgh.

Buoyancy in buyer interest has returned to some markets as a result of Brexit fatigue and stabilising consumer confidence. Buyers appear to be responding to realistic pricing and sales incentives in a needs-driven market.

In some areas there has been an improvement in sentiment in both the new build and second-hand markets, although this bounce back seems more pronounced in the new build market.

According to the Home Builders Federation survey, new build buyer confidence is at its highest since June 2017. It has moved from being the second biggest constraint on development in Q4 2018, to the ninth biggest constraint (out of 15) in Q1 2019.

Net reservations on new build sites were also up. The annual balance of opinion jumped from -28% to 18% between February and March 2019. Housebuilders have remained optimistic that sales rates will rise.

This improvement is arguably being seen in the wider market, with the RICS UK Residential Market survey for April also pointing to an improvement in market sentiment. Although still in negative territory, there has been an up-tick in the number of surveyors reporting a rise in new enquiries. These rose by a considerable 14% in March and a further 1% in April’s survey. The results suggest that, to some extent, sentiment is returning to the market as buyers adjust to uncertainty.

There is widespread recognition that Brexit isn’t likely to be resolved soon, so decisions to buy can’t be delayed indefinitely. The extended deadline of 31 October has released some pent-up buyer demand, providing the market with greater confidence.

Although the bounce-back in sentiment and buyer activity in the new build and wider market are positive signs, they are not necessarily a signal for rising prices. There has been the greatest interest and activity in those areas with realistic price adjustments.

According to Nationwide, annual UK house price growth was just 0.8% in May. Price corrections in London have started to ripple out to the South East, suggesting that this slowing in prices is not a temporary trend.

However, regional house price growth continues to defy the ongoing uncertainty. Prices in the year to March grew by 4.8% in the West Midlands, 4.5% in the East Midlands and 4.4% in Scotland.

The greatest changes in new build buyer activity appear to be concentrated in two areas: First, areas such as Scotland, where price growth remains steady and houses are relatively affordable. And second, areas such as London and the South East, where price corrections have provided opportunities for buyers.

As the market continues to be price sensitive, a greater number of transactions are subject to price reductions. To maintain or increase transactional activity, pricing needs to be pragmatic.

Transaction volumes have remained relatively flat, with national transactions falling by 0.5% in March, according to HM Land Registry. Regionally speaking, London, East, South East and South West maintained their downward trajectory with annual falls of 7.5%, 5.7%, 6.6% and 6.2% respectively in March.

Although transactions have fallen across all regions, activity has fared better in the Midlands, North and Scotland, mirroring the trend in house prices.

In terms of who is buying, UK Finance figures reveal that first-time buyer transactions overtook home movers in November 2018 and have continued to grow. This growth has been fuelled by Help to Buy, cheap mortgage rates, price reductions in some markets and other sales incentives.

In March 2019, 28,800 first time buyer loans were completed. However, this figure is actually down 2.4% when compared with the same period last year.

Home mover mortgages and buy to let mortgages were also down when compared with March 2018, but by a greater degree, falling 6% and 9.1% respectively.

While uncertainty is having an impact across the housing market, first-time buyers are proving the most resilient.