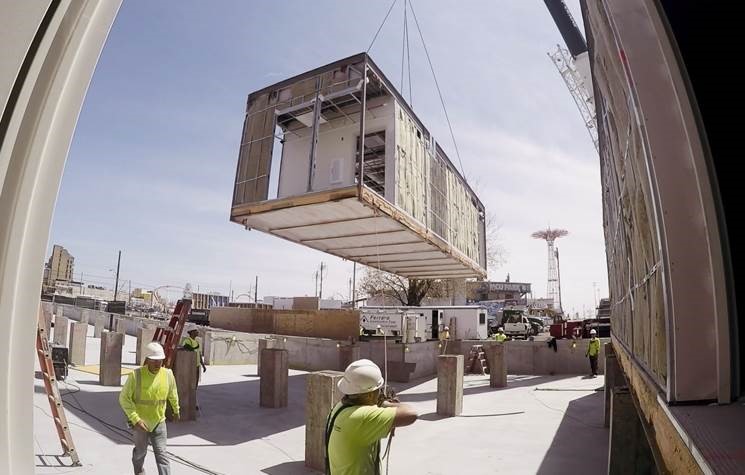 Britain’s housing market is broken and in need of fixing, says PM Theresa May. Good news, then, that the sector is facing an “Uber moment”, says Simon Wilson.

What is modular housing?

New houses or blocks of flats that are largely constructed off-site in sections (or “modules”) and then put together quickly on-site. For many people, the obvious association will be with prefabricated – “prefab” – housing that helped meet Britain’s emergency shortage of about 200,000 homes after World War II. But it’s an association that modular builders understandably get sniffy about. Prefab houses were low-quality and unattractive. Modular homes, their proponents say, are the opposite: modern, energy-efficient and with cutting-edge design. According to Nicky Gavron, the former deputy mayor of London and long-term advocate for this way of building, today’s modular homes are “precision-engineered, digitally designed and eco-efficient”, making for affordable homes and slashed energy bills. But while they may be light years away from rickety old prefabs, they could – like their forerunners – have a crucial role to play in tackling today’s housing crisis.

What role could they play?

Boosting supply quickly and improving the astonishingly low productivity in the sector. Even the prime minister recently conceded that the UK housing market is “broken” and in need of fixing. What that fixing will involve is, in some estimates, building about 300,000 homes a year to keep pace with demand, including around 100,000 low-cost “affordable” homes. At current rates, that looks all-but impossible, but modular could give it a boost. Last year, about 15,000 modular units were built in the UK, but the government wants that to balloon to 100,000 by 2020. “The construction industry is one of the last to embrace modernisation,” Mark Farmer, head of Cast Consultancy and adviser to the UK government on its construction strategy, recently told the Financial Times. “While we’re all using smartphones, construction is still pretty much the same as it was during Roman times.” The sector is surely ready for its “Uber moment”, or disruption by new technologies that will produce radical change and efficiencies.

What are the advantages of modular?

Speed, efficiency, productivity and quality. When you build a house from scratch on a site, you can’t build the walls until you have dug and set the foundations. You can’t work on the roof until you’ve built the walls, and you can’t start fixing the electrics and plumbing and so on until you’ve got a watertight house. With modular, you can prepare the site and make the foundations at the same time as doing much of the rest off-site in the factory. There’s no stop-starting due to bad weather or waiting for deliveries. It’s vastly more controlled, efficient and quick. There’s much less wasted material, no need for constant deliveries to site, less disruption for neighbours, a greater ability for managers to closely supervise what’s going on and a greater likelihood (say supporters) of a higher quality end product. Another key benefit is the ability to build on smaller plots that are less easily accessible, since there’s no need for a constant stream of lorries, mixers, deliveries and so on.

Who’s investing in the sector?

Financial services giant Legal & General is convinced: it has invested £55m in a modular factory near Leeds and aims to build 3,500 homes a year. Amazon is already circling the sector: in September it acquired a “flat-pack” housebuilder in California. And Google has launched a modular project in Toronto, and bought factory-made homes for staff, through its subsidiary Sidewalk Labs. In Germany and Japan, factory-produced homes are already common. Here, Berkeley Homes, one of the UK’s biggest luxury builders, is building a massive 165,000 sq ft factory at Northfleet in Kent, where it plans to produce 1,000 homes a year, and employ 240 staff – from plumbers, electricians and carpenters to surveyors, engineers and designers.

Are there other names to watch?

Modular developer Pocket Living is currently building the tallest modular residential tower in Europe, at Mapleton Crescent in Wandsworth. And Tide Construction, and its off-site manufacturing firm Vision Modular Systems, has just completed a gigantic 257-bed student accommodation scheme on a long, narrow plot next to Holloway Road tube station in north London. It took just nine months. It manufactures everything at a factory near Bedford (including electrics, plumbing and painting) and delivers to site. Next year it is putting up the tallest modular buildings in the world – two build-to-rent towers of 38 and 44 storeys in Croydon.

What are the downsides of modular?

The key one relates to space and logistics. Completed modular building sections take up a lot of room – and the bigger they are, the harder they are to transport, which in practice puts a limit on room sizes. In general, modular systems are much more suitable for flats and smaller terraced houses than they are for big ones. That’s because bigger properties can’t be fitted onto lorries (even an abnormal load can’t exceed a width of 4.3m or a height of 4.95m under Highways Agency rules). Instead, they have to be transported in smaller sections, which costs more and decreases the environmental, efficiency and benefits.

Are any large houses available?

Yes, though they are at the posher end of the market and tend to be branded as “precision-built” and “manufactured” homes rather than “modular”. The widely admired Huf Haus, known for its distinctive wooden frame and acres of glazing – and much prized by cash-rich self-builders who want a relatively easy life – is made off-site, delivered and installed. It takes about a week to put up (once you have a concrete slab base) and costs about £300 per sq. ft. Other well-known names (some of them not quite so pricey) include Stommel Haus, Facit Homes (which calls itself the UK’s “leading home manufacturer”) and Hanse Haus.

You can also read the full article here.